Donate now. Epilepsy Footprint is a non-profit organisation and all donations go towards improving the lives of people with epilepsy in the developing world who don't have regular access to medicines. 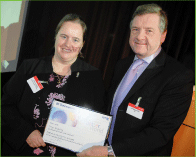 Sir Michael Rake presenting an individual BT chairman's award to Tanya Spensley which was a certificate and glass trophy in recognition for her 25 years work in the epilepsy field.

Sir Michael Rake also presenting a cheque for £3,000 to Tanya Spensley for the Epilepsy Society formerly known as National Society for Epilepsy in recognition of her Education, Development, & Awareness work with the charity.

Epilepsy Footprint is a non-profit organisation which aims to educate people everywhere about epilepsy. All our surplus funds are used in developing countries to improve people’s access to support services and medical treatments for epilepsy.

Too many people in these countries are dying from treatable seizures due to poverty, lack of access to medical services for epilepsy and general attitudes towards the condition. Ignorance towards epilepsy also means many people in the developing world are too scared to be diagnosed with the condition because it could potentially result in them losing their work, family or education. People known to have seizures could also be physically abused or poisoned by witch doctors."

So by going out and speaking to people about epilepsy our aim is to help people’s understanding and attitudes towards the condition and remove the stigma which is holding so many people back from leading a normal life with epilepsy.

The funding received from these presentations will be used in developing countries to:

Epilepsy Footprint was founded by Tanya Spensley who was diagnosed with epilepsy at the age of 18 months and has gone through childhood and adulthood with epilepsy.

After twenty five years of helping others with epilepsy at a local level Tanya decided to branch out to other parts of the UK and also help people in developing countries. She began visiting international congresses back in 1999 and has built up a wide range of contacts around the world. This has lead to further interest in learning about the large treatment gaps between developed countries and third world countries.

Through her training as an Accredited Volunteer for Epilepsy Action and an Epilepsy Information Network volunteer for the Epilepsy Society, Tanya began giving presentations in 2000 to many businesses like the Communication Workers Union and the Royal Society for Medicine and has spoken face to face with newly diagnosed patients at the Paediatric Departments of Barnet General and Barnet Chase Farm Hospitals.

Tanya was elected onto he Board of Governors at Epilepsy Society (2006-2012) and a Patron of the Gambia Epilepsy Association (2006-) after providing information and education to an epilepsy clinic over there. This has lead to further presentations at international congresses speaking on behalf of the work in The Gambia.

Here is a short film about Tanya’s work with the Epilepsy Society which won her the BT Chairman’s Award for Education, Development and Awareness. http://www.btcommunitychampions.com/chair_case_study08.php

The vision of Epilepsy Footprint is to keep improving people’s understanding and handling of epilepsy in everyday life both in the UK and abroad.

In many developing countries there is a negative attitude associating epilepsy with the devil and disease resulting in many people being disowned by their families, schools and employers. So going out and talking to people about the various aspects of epilepsy has been shown to bring people together rather than remain isolated and improve people’s confidence everywhere in handling seizures when witnessed.

All this is achieved by providing training and information to those who wish to understand and learn more about epilepsy.

This aim is ensured by giving various presentations regarding epilepsy in everyday life via: